Biofouling is a ubiquitous problem for a variety of industries, impacting the functionality of materials and devices.  Diverse approaches taken in the design of materials and interfaces to prevent microbial fouling often rely on atomic and molecular scale processes, however the fundamental mechanism/s underlying these processes, and their mode of action, in many cases continue to elude researchers.  Highly hydrophilic chemistries such as polyethylene glycol and zwitterion-based chemistries, have long been used to generate interfaces that prevent biological interactions at surfaces.  Such surface chemistries have been proposed to function through a combination of molecular water organisation and steric repulsion at the interface.  Experimental approaches have confirmed the presence of hydration layers associated with hydrophilic polymer-based surfaces, yet the fundamental mechanisms underlying their capacity to inhibit surface fouling, and how such hydration layers differ from equally hydrophilic interfaces that do not prevent surface fouling is still unclear.  Molecular dynamic (MD) simulations have gone some way to provide critical insights into their respective mechanism/s of action, however experimental approaches capable of adequately resolving features at a suitable spatial resolution to corroborate and build on these models have been lacking.   I will present a highly biofouling resistant coating composed of silica nanoparticles functionalised with a short chain hydrophilic silane. To understand the interfacial environment at the hydrated nanoparticle surface, frequency modulation – atomic force microscopy was used to provide sub-atomic resolution of the water structuring about the nanoparticle interface, which we validate using all-atom molecular dynamic simulations that strikingly predict similar structures of water layers on the original and ultralow fouling surfaces. The convergence of experimental and modelling data reveals that suitably spaced, flexible chains with hydrophilic groups interact with water molecules to produce a connective, quasi-stable layer, consisting of dynamic interfacial water, that provides a basis for antifouling performance of ultrathin, hydrophilic surface chemistries. This approach provides a road map for the future development and optimisation of interfacial chemistries and materials designed to combat biofouling and biodegradation. 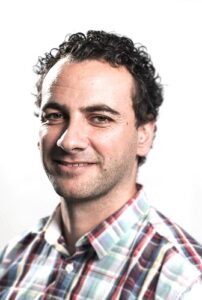 Paul Molino completed his PhD in 2008 at the University of Melbourne, studying fundamental microbial cell – material interactions, and the development of microbial fouling layers on artificial surfaces placed in marine environments.  Therein he used quartz crystal microbalance and atomic force microscopy techniques to study cell adhesion and colonisation of model and commercially available surfaces, as well as using confocal and fluorescence microscopy to follow the temporal development of microbial slime layers on toxic and environmentally friendly marine coatings in tropical and temperate environments. Since 2009 he has been a researcher at the Intelligent Polymer Research Institute at the University of Wollongong where his research interests include the development of nanostructured conducting polymer based biomaterials for nerve and muscle tissue engineering, and wound healing, and the development of fouling resistant materials and coatings for medical, terrestrial and aquatic applications. In particular, he has a strong interest in understanding the mechanism/s underlying the organisation of interfacial water around hydrophilic polymer adlayers, with the aim of tailoring these systems to be more stable and effective antifouling interfaces.