STEM Inclusion: The Next Time You Go to the Movies

How can we engage and inspire the next generation of STEM (Science, Technology, Engineering and Mathematics) leaders? Pop culture provides a unique platform to engage students in the STEM  fields. In this discussion, we will focus on using popular movies such as Marvel Studios’ Black Panther and Mary Shelley’s novel Frankenstein for classroom engagement in STEM and the Humanities disciplines. In addition, we will also discuss the ongoing community engagement efforts and programming for LTU’s Marburger STEM Center. 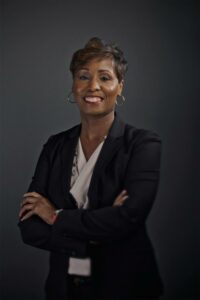 Dr. Sibrina N. Collins is an inorganic chemist and STEM educator focusing on using pop culture and movies to engage the next generation of STEM leaders. Dr. Collins earned a B.A. in chemistry (cum laude) in 1994 from Wayne State University (Detroit, MI). She earned her M.S. (1996) and Ph.D. (2000) both in the field of inorganic chemistry, from The Ohio State University under the direction of Professor Bruce Bursten. As a graduate student at OSU, she received significant training as a photochemist, where she used light to study photochemically reactive molecules using matrix isolation. She later completed a postdoctoral appointment at Louisiana State University (Baton Rouge, LA), where she focused on heart disease research.

Dr. Collins has held previous appointments at Claflin University, an HBCU (Historically Black Colleges and Universities) in Orangeburg, SC; The College of Wooster in Wooster, OH; and the University of Washington in Seattle, WA. She has also worked as a writer and editor for the American Association for the Advancement of Science (AAAS) in Washington, DC and the Director of Education at The Charles H. Wright Museum of African American History in Detroit, Michigan.  Dr. Collins has mentored 17 undergraduate chemistry students and published peer-reviewed articles in journals such as Inorganic Chemistry, Acta Crystallographia, Journal of Chemical Education, The Chemical Educator, and the Bulletin for the History of Chemistry.