Supramolecular polymers and materials: a journey 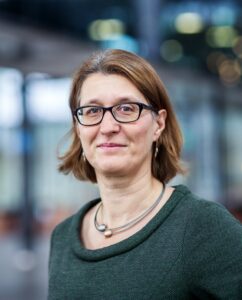 Biography: Anja Palmans obtained a degree in chemical engineering (1992) at the Eindhoven University of Technology(TU/e) and continued with a PhD on the topic of supramolecular chemistry (1997) in the group of Prof. E.W. Meijer. After a Postdoc in the group of Prof. P. Smith at the ETH Zürich (Switzerland) and working at DSM Research (The Netherlands), she became assistant professor at the TU/e in Eindhoven in 2005 and associate professor in 2010. Since March 2019 she is full professor in Supramolecular Chemistry and Catalysis at the TU/e. Her research interest include understanding controlled folding of macromolecules with pendant recognition motifs into well-defined, compartmentalized particles, with an aim to access enzyme mimics for catalysis in complex media and cascade reactions.