Abstract: In 1944, only 24 years after Staudinger’s seminal work on polymers, the first glycopolymers were described in literature. Glycopolymers are synthetic polymeric backbones featuring pendant and/or terminal saccharide moieties. It took however another 50 years before glycopolymers were studied for their inherent bioactivity, which stems from their ability to bind to lectins, carbohydrate-binding proteins, in a specific manner. Depending on the type of sugar attached, glycopolymer are known to interact specifically with surface receptors found on cell membrane. This allows the researcher to target specific cells, such as cancer cell, selectively, while non-cancerous cells do not engage with the specific carbohydrate structure. This has raised interest in the field of nanomedicine as nanoparticles prepared from glycopolymers were proposed as a vehicle to deliver drugs safely to tumors. However, before this can be achieved, we need to understand the relationship between the polymer structure and the ability of glycopolymer to become bioactive. For that purpose, we have developed a range of self-assembled micelles and other aggregates based on glycopolymer diblock copolymers and ABC triblock terpolymers. Besides investigating glycopolymers based on mannose, we have focused our attention to less explored glycopolymers such as fructose. The aim was to understand how polymer length and aggregation can influence the interaction with cancer cell, thus the cellular uptake. We found that this is not trivial as the change of the nanoparticle properties not only affected the specific interaction with the surface bound receptors, but also non-specific protein binding with blood proteins was encountered. Once we gained some understanding of suitable nanoparticle morphologies to achieve the highest cellular uptake, we found that the loading of anti-cancer drugs into the nanoparticles could again shift the physico-chemical properties. At the end, I will show how glycopolymers can also inhibit the infection by bacteria.

Biography: Martina Stenzel studied chemistry at the University of Bayreuth, Germany, before completing her PhD in 1999 at the Institute of Applied Macromolecular Chemistry, University of Stuttgart, Germany. She started as a postdoctoral fellow at UNSW in 1999 and is now a Scientia Professor in the school of chemistry as well as an ARC Laureate Fellow. 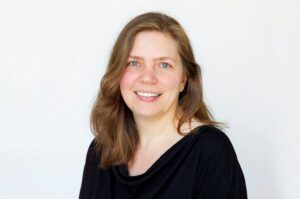